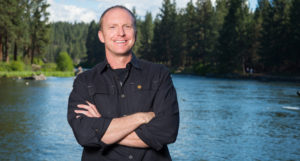 Dr. Jared Anderson is native of Bend, OR, going back five generations Dr. Jared Anderson grew up in Bend and graduated from Bend High School. The future dentist went on to graduate from Linfield College in 1995, then earned a doctor of dental surgery degree from Case Western Reserve University in 2002.

After graduation, Dr. Jared Anderson operated a solo dental practice for 12 years in scenic southern Oregon. Eventually, Dr. Anderson moved back to Bend to be closer to family and return to this beautiful lifestyle and country only central Oregon has to offer.

Dr. Anderson is an avid and competitive paraglider and recently became the USA paragliding champion in 2016!  He also set an Oregon state distance record in paragliding from Pine Mountain to just past Steens Mountain….145 miles!

Dr. Anderson, DDS, is an expert in creating healthy smiles using only the latest in training and tech. Dr. Jared Anderson has completed hundreds of hours of postdoctoral continuing education, including advanced courses in cosmetic dentistry, conscious sedation, and dental implants. He is also a leader in the use of CEREC technology, which enables Dr. Anderson to save his patients time and money by allowing him to deliver beautiful all-ceramic crowns in a single, short appointment. He is a member of the American Dental Association, the Academy of General Dentistry, the Oregon Dental Association, and the Central Oregon Dental Society.

Although a dentist by day, Dr. Anderson enjoys spending his nights and weekend time with Lucas, his son, traveling to new places and taking part in any of the outdoor activities there. Dr. Anderson also frequently donates his time to give dental treatment for those in need, typically in the Dominican Republic.